by  Janiki Cingoli, President of the Italian Center for Peace in the Middle East (CIPMO)

After 30 years of activities, CIPMO proudly presents its new website, which mirrors the Center’s new identity and its profound transformation.

Our Center was established with the aim of promoting the Israeli-Arab-Palestinian dialogue by adopting a balanced, non-ideological approach, without straying from our commitment to using our independent and critical thinking to understand the developments of the situation, always being realistic, and never losing hope. We endeavoured to build formal and informal channels for dialogue, which in a number of cases did have an impact upon negotiations.

With great concern and participation, we witnessed the gradual bogging down of the peace process, the internal fracture within the Palestinian movement, the crisis of the Israeli political forces that supported peace, and the formation of long-term right-wing government in Israel. However, the coming elections – to be held in April – may have surprising outcomes, particularly in the light of the establishment of a new centrist list called Blue and White (the colours of the Israeli flag), headed by the former Armed Forces Chief Benny Ganz, who forged an alliance with Yair Lapid, leader of the party Yesh Atid. According to the polls, this list is expected to gain more seats than the Likud, while the serving Prime Minister, Benjamin Netanyahu, may be charged with corruption.

The Israeli-Arab-Palestinian conflict no longer epitomises the shatter belts of the Middle East and the Mediterranean; rather, those contrasts are brought to the surface by the clashes between the Shiite and the Sunnis blocs (and by the deep rifts within the latter as well).

The US disengagement process from the Region has accelerated dramatically under Trump’s presidency, while Putin’s Russia has increasingly asserted its presence. Such developments lead to new scenarios and power relations that we endeavour to analyse and monitor carefully.

Special attention has been devoted to ethnic, linguistic, national and religions minorities. Such an issue has become absolutely crucial since the configuration and the very state structure established by the 1916 Franco-British Sykes-Picot Agreements were put into question, and since the collapse of the bipolar US-USSR world order that emerged after the Second World War and governed international relations until the late 1960s.

This is why CIPMO, over thirty years of activities, has gradually expanded its initiatives so as to encompass the whole Mediterranean region and (more recently) Africa, in line with a European-Mediterranean-African (EuroMedAfrican) axis, thereby shifting from a predominantly geopolitical approach to an integrated perspective that includes equal, transparent, fair and mutually beneficial cooperation.

Such approach is oriented towards civil society, including entrepreneurs and the vibrant non-for-profit sector, and aims at tapping on natural and environmental resources, new technologies and infrastructure to overcome crises by looking beyond those very crises. Our approach offers companies the experience and trustworthiness of an interlocutor capable of providing context-specific and customised services. At the heart of our approach lie the young and the Italian and Mediterranean schools and universities, since our goal is to build an interactive network, open to the Other and the Different-from-us. It is in the Other that we can find ourselves mirrored, and with such Other we can build a common area of peace, mutual understanding and prosperity.

If such a perspective is adopted, the very issue of immigration can be seen in its true proportions, and hence be better evaluated.  By focussing on the role of the diasporic communities of MedAfrican origins and on the creation of strong ties with the migrants’ countries of origin as well as with transit countries, it is possible to implement orderly and viable integration policies without necessarily ignoring security concerns or neglecting the fight against jihadi movements. The only realistic and actually viable way to face these issues is to adopt the perspective set out above.

Finally, to conclude the presentation of the new website, special mention should be made of all the artists that have kindly supported our Center for many years, and continue to do it, by donating their art works and by enabling us to organize – in collaboration with Sotheby’s – our annual “Art for CIPMO” charitable auction of contemporary art. The revenues of the auction are used to finance many of our projects.

A work of art is the result of a process that involves fantasy and creativity, entails the ability to read the present while looking at the future, and requires strong discipline, consummate skills, and experience.

The similarities between the creative process of an artist and our activities are several: we build channels of dialogue and mutual understanding with the Other, endeavouring to decipher the ongoing processes without filters or blinders, analyzing reality and seeking (even untrodden) ways to change it, always aiming at building a different future – at whose heart will lie a greater respect for humankind. 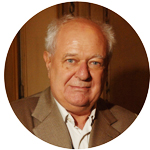 Janiki Cingoli has dealt with international issues since 1975. Since 1982 he has begun to deal with the Israeli-Palestinian conflict, promoting the first occasions in Italy for dialogue between Israelis and Palestinians and in 1989 he founded in Milan the Italian Center for Peace in the Middle East (CIPMO), which has since directed until 2017 when he was elected President.

Read all the EDITORIALS

Israel and Hamas reach an agreement on ceasefire in Gaza

Gaza, the Three Men Deciding on Peace or War